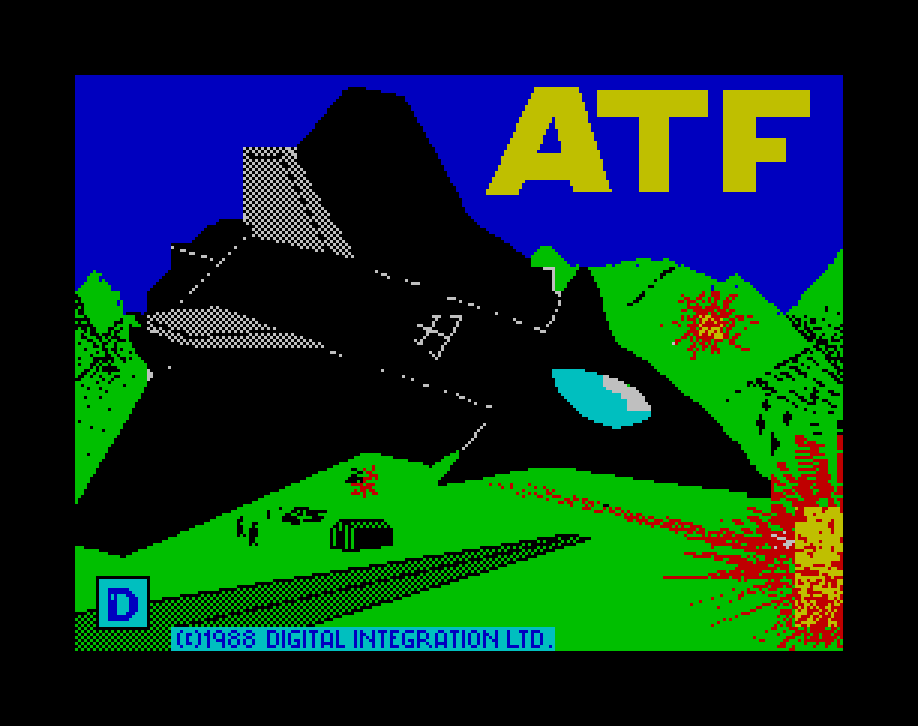 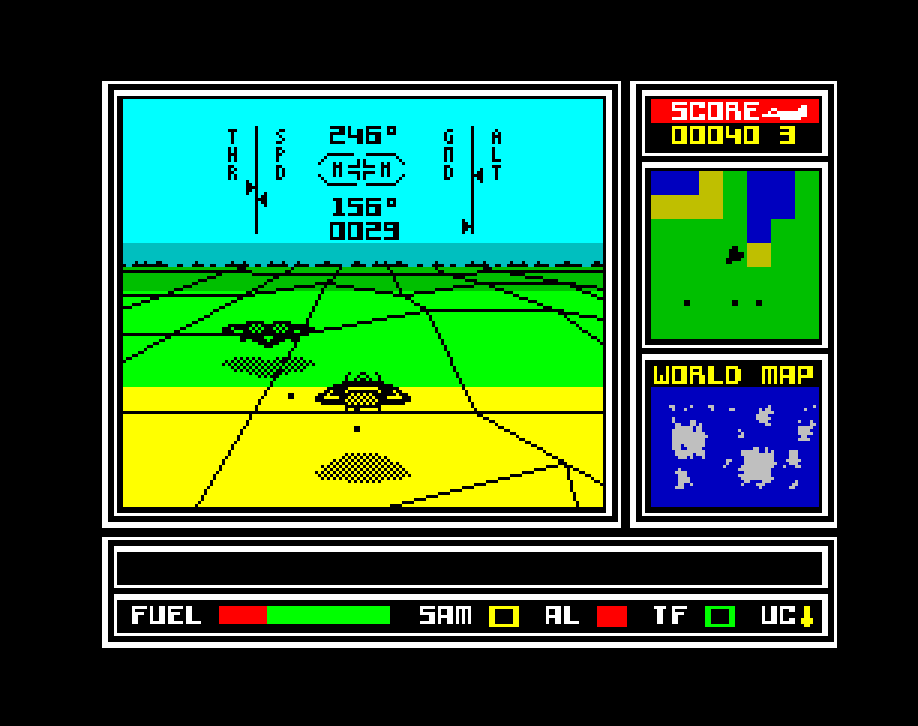 War has broken out in a future island archipelago. Both sides are evenly matched on the ground... but one side has a single squadron of ultra-modern Lockheed ATF fighter-bombers. Can you alter the balance of power with these few planes?

Your first decision is over what ammunition you will take on your mission. The ATF can be loaded with cannon shells, visually-guided ASRAAM missiles (which are not much use!) and more powerful Maverick missiles with a range of 100km which can take out over-the-horizon targets, selected from a database. Your refuelling and rearming is vital, and weaponry must be balanced against fuel supplies so that the ATF can fly within safe weight limits. The levels of arms and fuel are shown on bar graphs.

Once you've armed and fuelled you can begin your main mission. After a takeoff using maximum thrust, the ATF's speed must be maintained to avoid stalling and crashing. Flying low over a vertically-scrolling landscape, the ATF comes under constant attack from enemy forces. Enemy radar can be avoided with terrain-following equipment, but this reduces your speed and carries the risk of a crash.

A head-up display superimposed on the main screen shows engine thrust, the ATF's speed, ground height and altitude. The missile system available, the current direction of flight and a target's range and bearing are also shown.

Beneath the main screen, further indicators show fuel level and undercarriage status (UC), and warn of incoming missiles (SAM). An in-flight message window gives vital information on your mission, and a short-range scanner to the side of the main screen shows the type of terrain below and nearby enemy objects. Approaching ground-to-air SAM missiles trigger a warning alarm and with luck you can jam them in time using the ATF's onboard jammer.

The ATF also has an on-board flight computer, showing, on a series of flick-screens, enemy positions on a world map and the status of weapon systems and the ATF itself. The computer also holds a database for locking onto targets which is updated regularly as your intelligence service and on-board detectors find new targets.

A war situation report - giving a rundown of all recent gains and losses of allied and enemy bases, ground and sea forces, and communications and industrial complexes - is called up whenever the ATF return to an allied base. Your intelligence services will give you extra information at this point on the location of enemy forces.

Platoon Ocean Software, 1988 You are a raw young recruit in a Platoon of five, deep in enemy territory. Unprepared for the challenges that lie ahead, realisation dawns that you must not only survive the physical ordeals but retain your sanity amidst the horrors and injustices of war. As the game progresses, you must overcome […]

Saboteur You are a highly skilled mercenary trained in the martial arts. You are employed to infiltrate a central security building which is disguised as a warehouse. You must steal a disk that contains the names of all the rebel leaders before its information is sent to the outlying security stations. You are working against […]